The Rising Stars
The success of Harry Potter movies has made Daniel Radcliffe, Emma Watson, and Rupert Grint the centre of public attention. The three rising stars have grown up on screen and grown into his or her role as an actor.

Daniel Jacob Radcliffe was born in Fulham, London, 23 July 1989. His nickname is Dan. He is the only child of Alan Radcliffe and Marcia Gresham. Dan has dark brown hair and blue eyes. His height is about 168 cm. he is a loyal, shy, down-to-earth, and humorous person. He is also intelligent and somewhat mysterious. He loves football, formula one racing and gymnastic.

Emma Charlotte Duerre Watson was born in Paris, France., 15 april 1990. Her nickname is Emma. She is the daughter of Chris Watson and Jacqueline Luesby. She lived in Paris until the age of five before she moved with her mother and younger brother Alexander to Oxford, England. Emma has wavy brown hair. Her height is 165 cm. she is a generous., friendly, and determined person. She also said that she is a little bit stubborn. Emma loves dancing, singing, tennis and art.

Rupert Alexander Grint was born in Hertfordshire, England, 24 august, 1988. His nickname is Rupert. He is the oldest son of Nigel Grint and Jo parsons. Rupert has bright red hair.

His height is 180 cm. he is an active and humorous person. He’s also very humble. However, he is the shyest of the three Harry potter co-stars. Rupert is arachnophobic. It means that he is afraid of spiders. He likes all kinds of music, but his favorite is classic rock and roll. His favorite school subject is Chemistry.

These Hogwarts trio have been really good friends, not only on screen but also in real life. their secret of friendship is that they always understand each other although they have different backgrounds and personalities.


1. Which of the following phrases which best express the main topic of the passage?


2. What is the main idea of the second paragraph?


3. Which statement is true about Emma?

4. What is the writer’s intention writing the text?

5. Their secret of friendship is that they always understand each other although they have different backgrounds and personalities…………. (in the last paragraph). What does the underlined word refers to?

The following text is for questions 6 to 10. 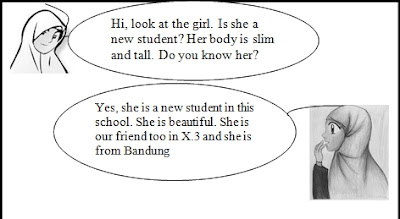 6. What is the conversation about?


7. Where the conversation takes place?


8. These statements are true, except …


9. These words are adjective, except…


11. Which one of the words below to show your compliment?


12. Which one the statement to response your friend’s compliment?


13. Which one is expression of sadness?


14. Where is the expression to show your pride to your friend who has been succeed on the final exam?


THE FOUR SEASONS
Unlike Indonesia which has two seasons, the rainy and dry season, Australia, Europe, and America have four seasons. They are winter, spring, summer, and autumn.

Winter is the wettest of the season. It is also the coldest season. Snowfalls are very frequent in this season. People usually wear thick clothes such as sweater, jacket, and scarves and eat hot soup to make their bodies warm.

Spring is a transition between winter weather and summer weather. However snowfalls are still cool but the sunshine increase. Winds, in general, increase. Spring is the windiest season. People like spring because the flowers bloom in this season.

The season after spring is summer. Summer is the warmest of the season. The sunshine brightly. Many people spend their time swimming and hanging at the beach.

Autumn is the transition season between summer weather and winter weather. The condition in the early autumn is usually dry. Autumn is generally, the calmest season with the combination between windy and cold temperature. The leaves fall in this season. They are many falling leaves everywhere.

16. The wettest season in Australia is…….


18. The following are seasons in Europe, except….