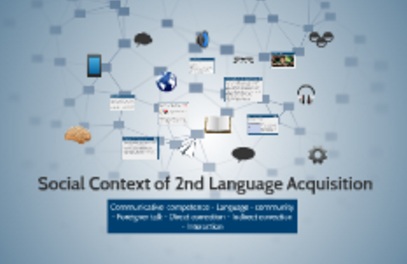 The communicative approach is originally based on the Sociolinguists’ view on Second Language Acquisition. Sociologists tend to view that language is acquired through the medium of input and interaction. Furthermore, the input and interaction are modified in some cases, such as when the competence of a speaker is in different level with the hearer. Those modification occures in order to gain a succesful communication. Accordingly, social environment where the interaction takes place has a significant role in the process of acquisition. Thus, the core of communicative teaching lies on the process of interaction is social life.

Therefore, in this paper, we are going to examine the sociologists’ view on Second Language Acquisition in the first part of the discussion, and its implication on language teaching in the next part. Specifically, the issues discussed in this paper are guided by these following questions:

The discussions about second language acquisition are always initiated by the questions around what exactly the L2 learner comes to know, how the learner acquires this knowledge, and why some learners are more successful than others. For instance, linguists answered the questions by grammatical approach, which believe that the goal of second language acquisition lies in gaining grammatical competence. Furthermore, learners gain this competence through the exposure of grammar. Thus, a successful learning is resulted from an adequate exposure of grammar. In contrast, a less successful learning is resulted from the lack of the exposure.

The Model of Communicative Competence
The model which will be presented here is the model proposed by Canale & Swain (1980).


It is the first propesed model, and it posited four components of communicative competence

Sociolinguistic competence – the mastery of the sociocultural code of language use (appropriate application of vocabulary, register, politeness and style in a given situation).
Discourse competence – the ability to combine language sturctures into different types of cohesive texts (e.g., political speech, poetry).

Variation on Learner Language
The variation also occurs in L2 learners, some learners are more successful than others. In explaining this phenomena, sociologists argue that variable feature occurs in the production of any one speaker (native or language learner) depends largely on the communicative contexts in which it has been learned and is used. Furthermore, The extent of using English in communication becomes a factor influencing the acquisition of L2.

Input and Interaction The process of acquisition is influenced by some aspects such as language input and interaction. Language input is considered as primary “data” for essentially linguistic and/or cognitive process. In other words, it is the source of data which in turn is further processed in the interaction to gain more advanced knowledge. Furthermore, interaction is generally seen as essential in providing learners with quantity and quality of external linguistic input which is required for internal processing. Therefore, language input and interaction play important roles in the process of acquisition.

The Implication of the Social Context on Teaching Methodology

Communicative Language Teaching
The goal of communicative competence lies on the gaining communicative competence, which has been explained earlier. The process of teaching and learning in the classroom also concerns with activities facilitated by the modification of input and interaction. Moreover, The teacher is actively involved in the activities, and becomes the facilitator and motivator, while students are expected to be comfortable with their peer. Therefore, the activities tend to be in the form of classroom or pair discussion.

Specifically, classroom activities using communicative language teaching are guided by some considerations below

The Strength and Weakness of the Approach
Strength: