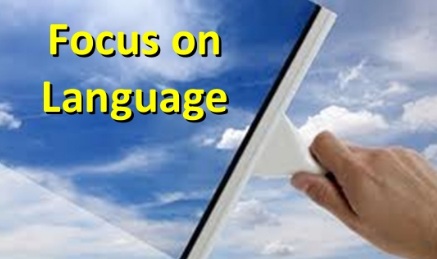 FOCUS ON LANGUAGE
In this chapter the writer found a problem when he began teaching language. And the students were often taught unrelated structures and to their context of used. In the social science training he believes that human behavior could only be understood in the contexts when it happens, because context would affect behavior. Undeniably a form of human behavior the language could only be understood in the context when it occurred.

Grammar and Grammaticality⇒Grammar:
1) An analysis of the structure of a language, as in a corpus of speech or writing (a performance grammar) or as predictive of a speaker’s knowledge (a competence grammar).
2) An analysis of the structural properties which define human language (a universal grammar).
3) A level of structural organization which can be studied independently of phonology and semantics.

The conformity of a sentence or part of a sentence to the rules defined by a particular grammar of the language (Crystal 1992: 35-36)⇒Grammar. In a description of the structure of a language and the way in which linguistic unit such as words and phrases are combined to produce sentences in the language (Richards, Platt and Webber, 1985).⇒Grammar: A Problematic Concept

Because of there are many of the assumptions that are made about grammar and grammaticality problematic. This research conduct with using samples from eighty native and non-native teachers of English as a foreign language, and asked them which were grammatically acceptable and not. Nunan and Keobke (1997)⇒Grammar and Discourse

Discourse is any naturally occurring stretch of language occurring in context (Carter, 1993: 22). ⇒Grammar is the study of how syntax (form), semantic (meaning), and pragmatic (use) work together to enable individuals to communicate through language.

Vocabulary
⇒Vocabulary and Grammar
Vocabulary is more than lists of target language words and intimately interrelated with grammar. It is possible to divide the lexical system of most languages into “grammatical words”, such as prepositions, articles, adverbs, and etc. The “grammaticality” of vocabulary also manifests itself in word morphology, that is the grammatical particles that we attach to the beginning and ends of words in order to form a new words.

⇒The Status of Vocabulary Within the Curriculum
Vocabulary has played second fiddle to grammar. And proponents of audiolingualism argued that foreign language would be most effective if learners concentrated their effort on mastering the basic sentence patterns of language.

⇒Concordancing
In addition to enabling researchers to do frequency counts, they also reveal fascinating patterns in a language. For example, for the noun way is taken from Willis (1990: 28), who points out that it, is the third most common nouns in English after time, and people.

Data bases enable linguists to identify patterns in language that are not immediately apparent. Another advantage of these large data bases is that they enable researchers to identify the functions performed by particular words.

Pronunciation
⇒Age and the Critical Period
We look at aspects of phonological system of language that tended to be viewed somewhat differently from the grammatical and lexical systems. Pronunciation seems to be more apparent than for grammar and vocabulary.

⇒Segmental and Suprasegmental Phonology
Segmental phonology has to do with the individual sounds of the language. And Suprasegmental phonology has to do with stress, rhythm, and intonation patterns in the language. Minimal pairs is the tasks are designed that help learners discriminate, and ultimately produce, words that differ only in a single contrasting sound. ⇒Pronunciation and Listening

Metaphors for Language Development
⇒The Building Block Metaphor
From the observation in the learning/ teaching process, there is alarming gap between what I was trying to teach and the things that they actually appeared to be learning. And also the effect of my pedagogical effort sometimes seemed to make my learners worse, not better. Whereas learning another language was a process of erecting a linguistic “building” in step-by-step fashion, one linguistic “brick” at a time.

⇒The Organic Metaphor
The organic metaphor describes second language acquisition as more like growing a garden than building wall. From such a perspective, learners do not learn one thing perfectly one item at time, but learn numerous things simultaneously (and imperfectly). And an organic approach to grammar dramatizes to learners the fact that different forms enable the learners to express different meanings in different context of use.⇒“Growing Their Own Grammar”: Some Data From Learners

The organic notion that learners “grow their own grammar” is readily demonstrated by tasks such as the following in which learners are asked to identify and explain the differences between closely related grammar items, such as simple past/ present perfect or the active and passive voices.

Language as Discourse
⇒The Relationship Between Sentences And Texts
There are three Extract that some of it is difficult at first and second language readers so they need to understand the grammar and vocabulary in each extract. And the structure and meaning of the individual sentences, readers need to know how the sentences relate to each other.

⇒Textual Connectivity
The interconnections between sentences in discourse and the contributions they make to coherence have been studied by Hoey (1983, 1994). And according to Hoey, a coherent passage is the existence within the sentences of certain “text- forming device”. Most of the sentences can be connected to preceding ones by what are called anaphoric or “backward pointing” devices, for example such, its, this.


Creating Cohesion
According to Halliday and Hasan (1976), they identified five different types of cohesion. These are reference, substitution, ellipsis, conjunction, and lexical cohesion. But reduces become four, with substitution being seen as a subcategory of ellipsis and it shown in Figure 4.2 Cohesion in English

⇒Reference
Cohesive reference is the subsequent items can only be interpreted with reference to the initial phrase of sentence one. For example: he, him, and his, Martin Scorsese, he all refers to a single individual.


There are three types cohesive reference

⇒Conjunction
Conjunction is differs from reference, substitution, and ellipsis. And there are four different types of it, and they signal the following semantic relationship: temporarily, causality, addition, and adversity. Examples of each type are shown in page 122.

⇒Lexical Cohesion
The final category of cohesion is lexical cohesion. It occurs when two words in a text are semantically related in some way. In Halliday and Hasan (1976), the two major categories of lexical cohesion are reiteration (repetition, a synonym or near synonym, super ordinate, and general words.) and collocation can cause major problems for discourse analysis because it includes all those items in a text that are semantically related. The problems arise because, in contrast with other categories, lexical cohesion is realized through open rather than closed class items. It includes pronouns, conjunctions, prepositions, etc.

⇒Rhetorical Pattern in text
Hoey (1983), argues that ordering of information in discourse can be accounted for in terms of certain rhetorical relationship such as cause-consequence, problem-solution. By using four sentences to illustrate the ways in which these relationships function in discourse.

Making Sense
We have looked at some of the linguistic element that helps to establish the coherence of language. But in this example do not guarantee that speaker or writer will be understood. Although the conversational fragment does not any of cohesive devices described, most people agree that it make sense. It makes sense, because it is possible to create a context in which it fits together at a functional level. As the result, the missing bits of conversation, which would make it cohesive as well as coherent, could be stored. The conversation works because, as competent users of the language we expect the function “request” and followed by “explanation” so transitive verb to be followed by an object.

⇒Functional Coherence
In none of these interactions is miscommunication caused by the interlocutors getting their linguistic facts wrong. And the miscommunication occurs at the level of discourse. Communication breaks down because one person misinterprets the function of the other person’s utterance.

Speech Acts
Speech acts are simply things people do through language, and when using language we not only make propositional statements about object, entities, and states of affairs and so on, but we also fulfill functions, for example, “apologizing, complaining, instructing, agreeing, and warning”.

Background Knowledge
⇒Interpreting Discourse
In this section, we look in greater detail at the ways in which things we know about the world help us in the interpretation of discourse and the inadequacy of linguistic knowledge such as knowledge of the vocabulary, grammar, and discourse features is demonstrated by reading text.⇒Schema Theory

Schema theory suggests that knowledge we carry around in our heads is organized into interrelated patterns. These are constructed from all our previous experiences of a given aspect of the experiential world, and they enable us to make predictions about future experience. Given the fact that making sense of discourse is a process of using both our linguistic knowledge and content knowledge, these schemata or “mental film scripts” are extremely important.

⇒Background Knowledge and Functional Interpretation
Widdowson provides a lively piece of (fictional) interaction to demonstrate the points he wishes to make. In the example, we can look that A’s first statement is a statement. B’s response and A’s statement is taken as refusal of the invitation. This is recognized in A’s final remark.

Pedagogical Implications
There are many different ways of activating organic learning, and many traditional exercise types can, with a slight twist, be brought into harmony with this approach, particularly if they are introduced into the classroom as exploratory and collaborative tasks. (See Wjnryb’s 1990, and Wood’s 1995)

⇒Teaching Language as a Set of Choices
It is difficult to give learners hard-and-fast grammatical rules is because once grammar is pressed into communicative service the choice, in many instances, will be determined by the meanings learners themselves wish to make. And it depends on the message you wish to convey. ⇒Encouraging Learners to Become Active Explorers of Language

By exploiting this principle, teachers can encourage their students to take greater responsibility for their own learning (The example can be found in Heat, 1992). Student can bring samples of language into class, and they can work together to formulate their own hypotheses about language structures and functions.

⇒Encouraging Learners to Explore Relationships Between Form, Meaning, and Use
This principle show learners that form, meaning, and use are inextricably interlinked, and what grammatical choices (for example, with combine two pieces of information using coordination or subordination) will be determined by considerations of context and purpose.

The questions:
1. What are the essential characteristics of an organic approach to second language acquisition?