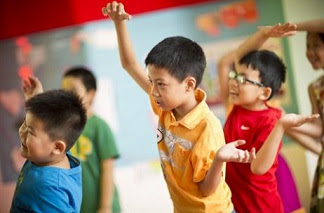 
TPR (total physical response) is a method of teaching language using physical movement to react to verbal input in order to reduce student inhibitions and lower their affective filter. It allows students to react to language without thinking too much, facilitates long term retention, and reduces student anxiety and stress. In order to implement TPR effectively, it is necessary to plan regular sessions that progress in a logical order, and to keep several principles in mind. TPR is not: Simon says, gesture based songs, simply using commands to practice English


What's so good about TPR anyway?

● Easy to implement/no translation
TPR instruction requires no translation or L1 support. It can help students and teachers make the transition to an English language environment.

● New playing field: no disadvantage for academically weaker students
TPR does not depend on left-brain, “academic” skills. This gives all students a chance to shine in a new environment.

● Trains students to react to language and not think about it too much
TPR requires an instant reaction. As there is no time to think during TPR practice, students can break the bad habit of over-analyzing language and become more comfortable with “going with the flow”, or guessing from context.

● Reduces pressure and stress for students
TPR does not require a spoken response from students. Also, if implemented properly, students always understand what is happening during TPR practice, resulting in increased confidence and a lowering of the affective filter.

● Long-term retention/“magic” effect
TPR results in long-term retention of language items, and the constant repetition and recycling involved reinforces this leading to a “magic” learning experience.

● Addresses important weakness of Japanese students
Japanese students, due to teaching methods and their school environment, have tended to be strong at reading and writing English, and weak at listening and speaking. TPR addresses this by working on students' aural comprehension, at the same time as forcing them to be active listeners.

● Perfect for TT
TPR is perfect for team-teaching classes, as with two teachers one can serve as the model while the other calls out commands.

● Hard to show
Results come from regular, planned application. One shot lessons, while perhaps interesting or diverting, do not yield the same results as a carefully thought out series of lessons.

The theories behind TPR

● Childhood language acquisition theories
Children are exposed to huge amounts of language input before speaking. Language learners can also benefit from following this “natural” progression from comprehension to production, instead of the more normal situation where learners are asked to produce instantly.

● The right brain/left brain divide
The left brain can be described as logical, one-track, and cynical. It is used when analyzing, talking, discussing, etc. Most classroom activities in Japan are aimed at the left brain. The right brain is used when moving, acting, using metaphor, drawing, pointing, etc. It is targeted by sports and extracurricular activities in Japanese schools.

When language is taught by lecturing or explaining, the cynical left brain is targeted and the information is kept in short term memory (if at all). It is soon forgotten as it never becomes “real” to the student. When language is taught actively through movement, the right brain “believes” the information and retains it, in the same way that skills such as swimming or riding a bicycle are remembered long term.

TPR helps reduce the affective filter because it is less threatening than traditional language activities. Students do not have to produce language. Mistakes are unimportant and easily (and painlessly) corrected by the teacher. Language is remembered easily and long-term.

Read also:Semantic Analysis of Lexical Meaning “Just The Way You Are” song lyric

Some principles of TPR

● Prepare a script
It is essential to prepare a script for what you want to do, as it is extremely important not to change the language half way through. It is also important to recombine previously learned language in new ways. These factors, combined with the pace necessary for successful TPR instruction, mean that it is extremely difficult to improvise the commands.

● Build on what has gone before
TPR instruction should be seen as a progression, with new language being added to and combined with the old every session.

● Recycle language and review extensively
On a similar note, previously learned language should be reviewed and cycled into lessons constantly in order to reinforce it.

● Don't change the target language
While it can be useful to introduce synonyms, it is extremely important that the language not be changed half-way through a session. This is extremely confusing for students.

● Be good-natured and positive
In order for students to relax and feel comfortable, during TPR practice the teacher should project a friendly and positive manner.

● Incorporate some humor
Once students are used to TPR practice, introducing a limited amount of humor into the class can greatly increase students interest and enjoyment.

● Students don't speak
Students should not be forced to repeat the commands or otherwise speak until they are ready.

● Students don't “help” each other
Students should not need help with the TPR commands, as the meaning should be obvious from context/the teachers' explanation/previously learned language. Translating commands into Japanese reverts to left brain input, and the benefits of TPR are lost. Student listening abilities are also not improved.

Ok, that all about Total Physical Response / TPR (Theory Princip),

here i have some interesting article,
May you would like to read this: Basic Grammar
Thank you for visiting our blog, fine ad read other article in this blog